Survival sex wars in the heart of the Amazon

You are stranded in the middle of the jungle with no matches, worn out and surrounded by savage fauna and flora. Choose a bad campsite and you won’t last until morning. Building a survival shelter will require you to obtain primitive tools. There’s no dinner unless you hunt an animal first. This is not quite what our playtesters had in mind when they planned their lovely weekends in the center of Wroclaw…

Although the players were not in any real danger during our gameplay tests for Green Hell, their reactions to virtual risk provided us with genuinely valuable information – we looked at their survival strategies and made a gender breakdown.

The open-world survival game Green Hell was developed by the independent studio Creepy Jar and officially launched on September 5, 2019 to overall positive reviews in the Early Access phase. The game was equally well received on its release day.  Even today, players around the world are still playing it, and the developer is constantly developing and promoting it. Green Hell has sold nearly 600,000 copies, of which nearly 200,000 were distributed in April this year – right after the long-awaited online co-op update. That is not all – there will also be a new PvE mode in Q3 2020, and there is a console release coming in Q4.

What is Green Hell all about?

A jungle adventure quickly turns into a real test of the player’s character. First of all, to survive, you need to regularly get water and food. However, not every fruit is edible, which makes hunting for meat a safer option, whether it’s a parrot or crocodile. Fire and shelter will come in handy, too. To rescue your kidnapped partner, you will not only have to fight against wild tribes and unfriendly environment but, above all, conquer yourself. As it turns out, in extreme conditions mental condition is just as important as physical strength. 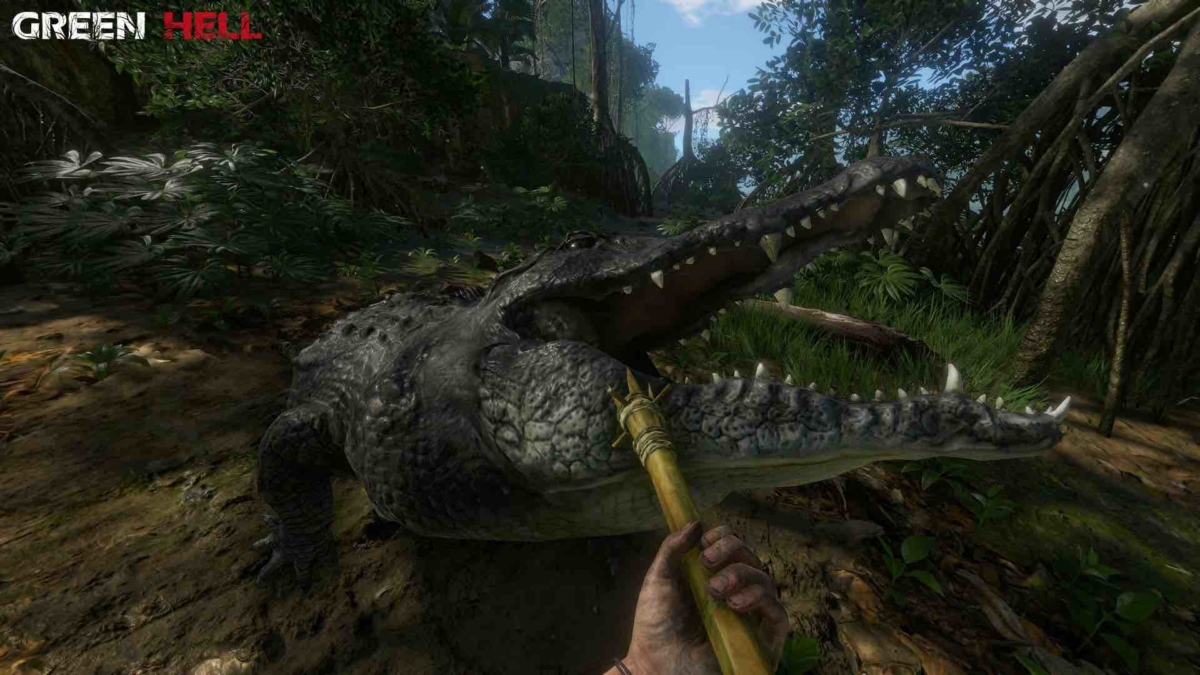 We invited twelve players (six women and six men) to our lab where they faced the challenges in the game.  We recorded their reactions while and analyzed their decisions. Here’s how it went.

The tutorial starts on safe ground – as the evening approaches, your beloved one asks you to start a campfire. Once the player leaves the tent, difficulties begin to pile up. You are looking for wood, but there are only a few branches lying on the ground. In addition, you don’t have any matches with you. It only gets worse as you continue; you find yourself stranded in the middle of a tropical rainforest without a machete or knife, but in a desperate need to build a camp. Even though the respondents left the playtest satisfied, not all of them successfully completed individual parts of the game. 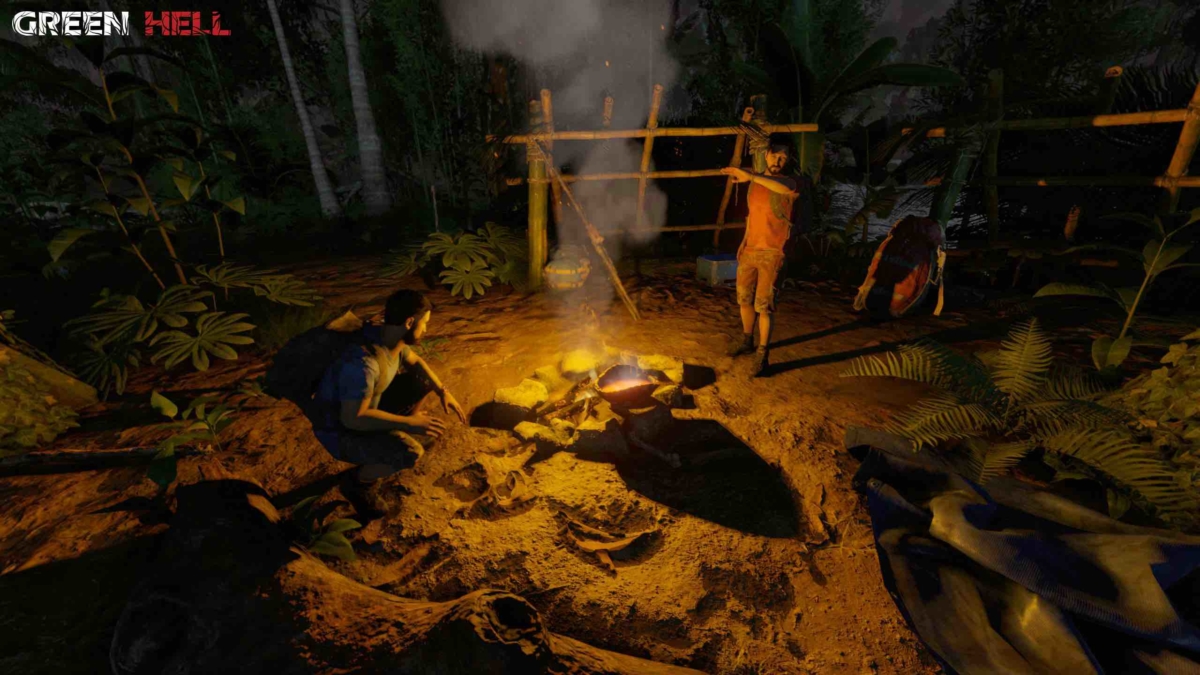 The primal gatherer and hunting communities developed a gender-based division of labor: women were gatherer, and men were hunters and used hunting gear. Over the course of 11,000 years the situation has become a bit complicated – this division is completely irrelevant today. It seems that the progress of civilization has completely suppressed the atavistic instincts in people. Or did it?

At the beginning of the Green Hell tutorial, the player must start a fire and a machete appears in the field of view. However, not all players picked it up immediately. Although all examined women eventually added the machete to their inventory during the game, only half of them noticed it immediately. For comparison – at first only one of the men missed the machete.

Almost all playing men immediately used the machete. After picking up the tools, they headed straight for the log to chop the wood into smaller pieces needed to start a fire.

Only two women immediately used the machete to obtain the raw material. Most of them adopted a different strategy – they spent the first minutes searching for brushwood and broken branches in the lower parts of the forest. 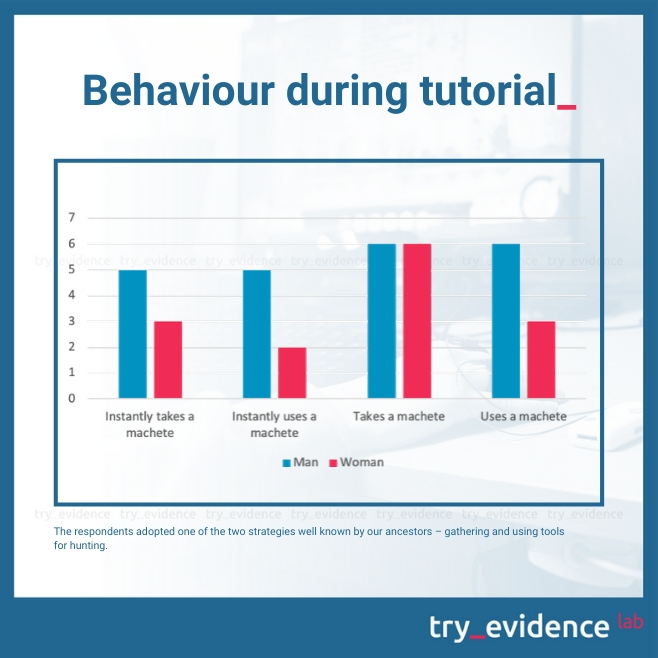 In the second part of the study, players faced a new situation. We threw them at the deep end, in the middle of the jungle with the task of building a camp with no tools available at hand. Women did slightly better here – during the challenge, 2 out of 6 women managed to craft a tool for cutting logs. They used whatever was available: lianas, sticks and stones. Among the male respondents, only one player managed to craft the item. 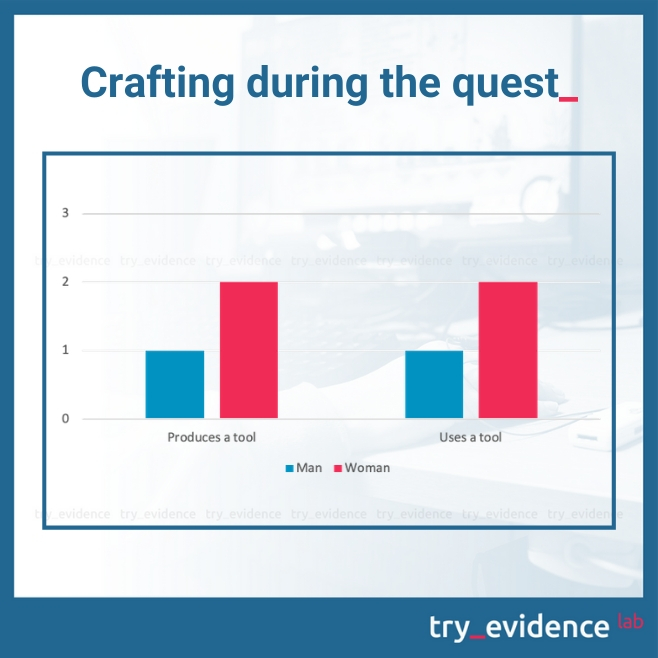 Both sexes demonstrated imagination and creative search for a solution, but their approaches differed. While starting a fire, men predicted that the machete would allow them to quickly  obtain firewood, while women decided to look for branches instead. In contrast, when building a camp – men relied more on their muscles, while women dedicated some time to build a tool that would save them the effort.

Who did better in virtual survival?

In prehistoric times, when women were engaged in gathering, they supplied communities with 60 to 80% of the food. In the real world, gathering is the more effective way of obtaining food, although keeping a balance between the two approaches is very important. What’s the hunting/gathering balance like in Green Hell?Who showed a better instinct to survive in the virtual world – 21st century women or men?

As it turns out, the game clearly favors active hunting. Only half of the surveyed women started a fire in the designated timeframe – and only those who used the machete to get the wood succeeded. The respondents who took the collector approach did not manage to complete the challenge. Only one man failed to start a fire – the one who stuck with the collector strategy for 20 minutes. 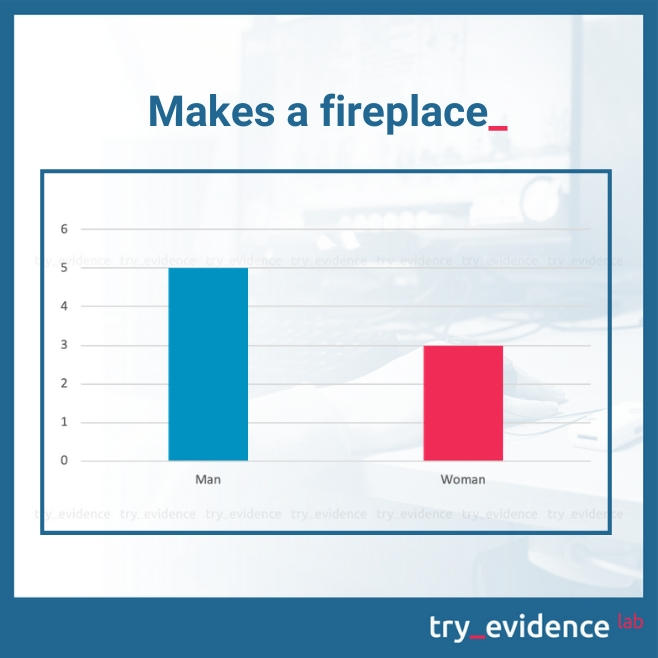 Men’s approach, although more effective, only slightly affected the speed of completing the task. According to our analysis, men took on average 1.5 minutes shorter than women to start a virtual fire. 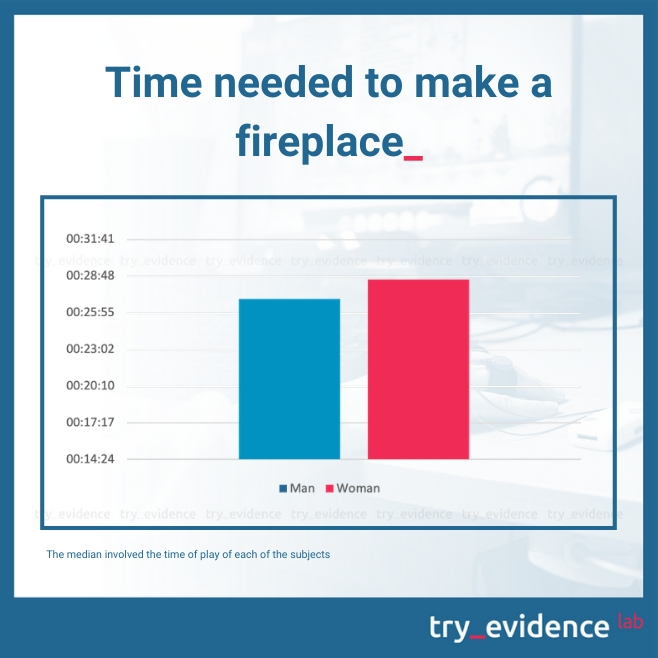 Men noticed the machete faster. It took them an average of 9 minutes, while women took about 11 minutes. Later in the game, men, who managed to make a makeshift axe, needed 14 minutes to do it. The average time for women was about 22 minutes. Although more women coped with this task, it took them twice as much time. 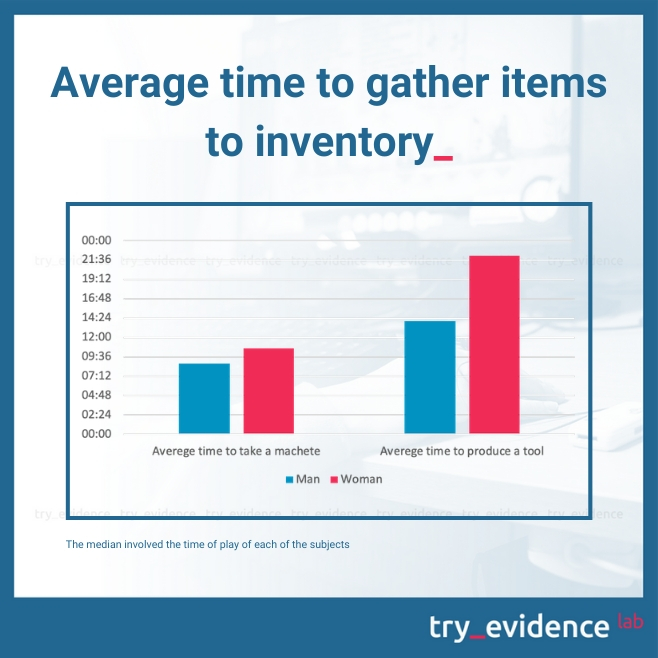 We noticed that having obtained the machete, the men immediately headed to the nearest trees and chopped them to pieces. Women took an average about 3 minutes longer to start using the tool they found. 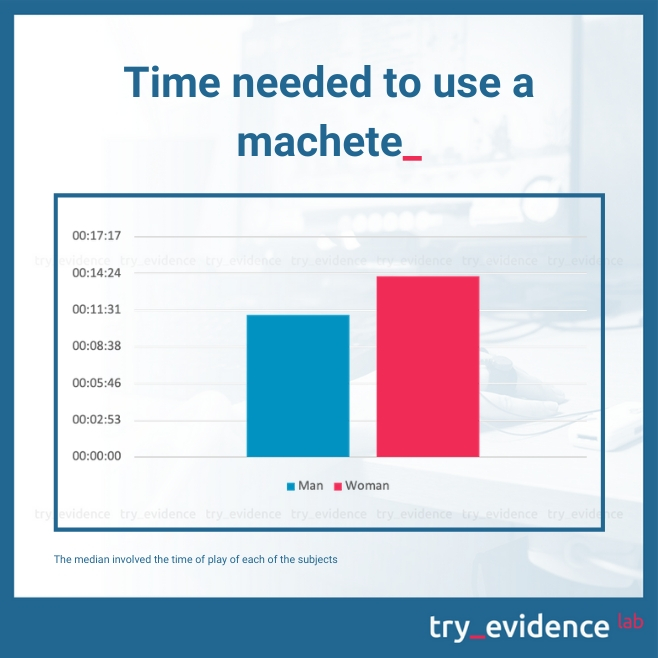 Our study shows that the strategy adopted by men led to faster results and was more effective.

Based on the analysis of men’s and women’s gameplay in Green Hell, we examined the differences in their primal strategies. Women more often resorted to gathering, while men engaged in hunting with the use of tools. Although this may not always be true in real life, the game is clearly designed for people who focus on strength, aggression and speed, at the expense of patience, prudence and passive acquisition of raw materials. Based on our Green Hell tests, we give men a better chance of survival, but it’s worth remembering that in the 21st century  lighting a fire without matches is equally challenging for for men and women. 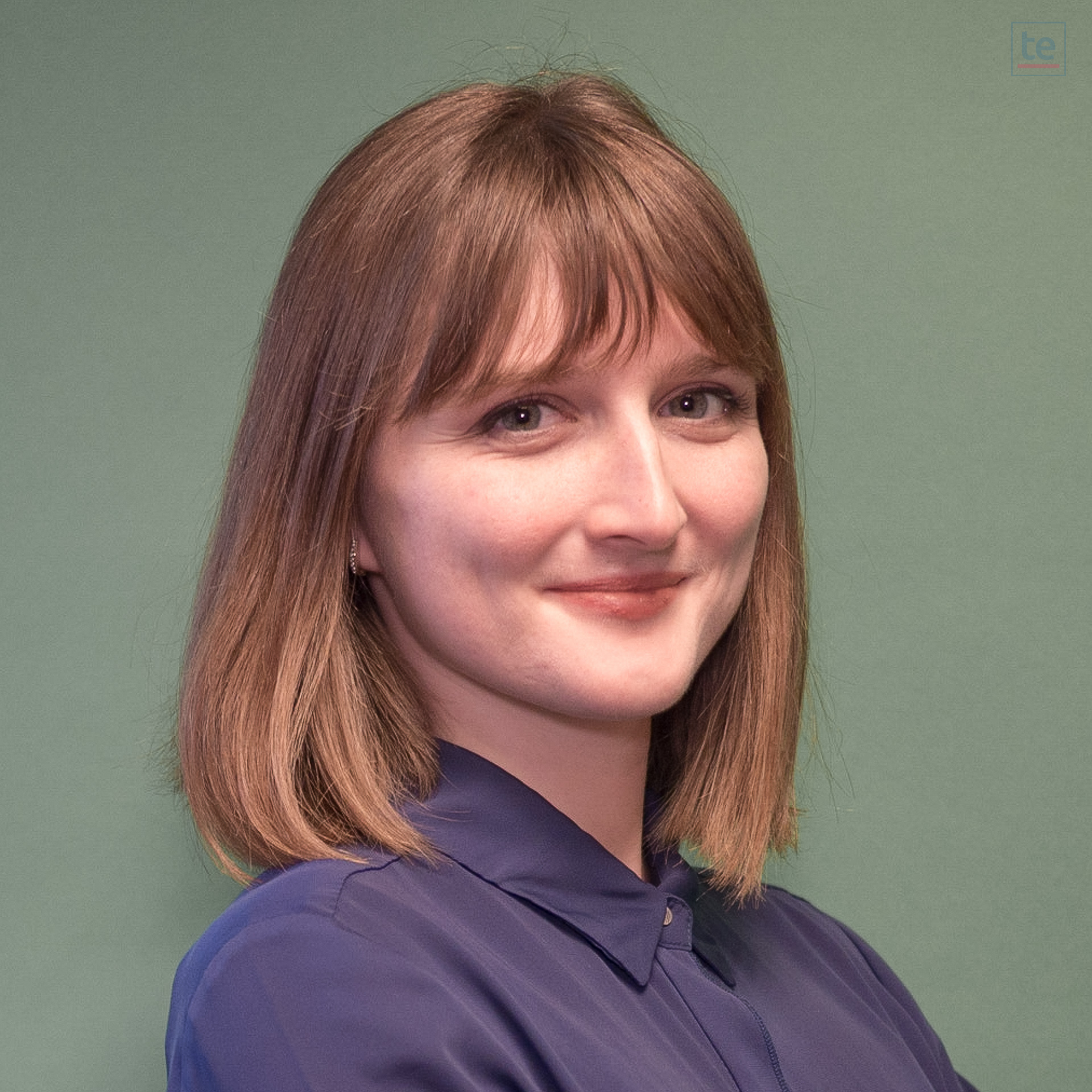 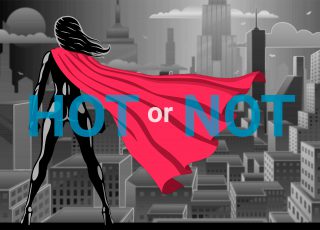