You can read this article in 10 minutes

Have you ever wondered which video game character is the prettiest, coolest, or simply most desirable? At Try Evidence, we took a closer look at virtual heroes and heroines who rated highly in terms of attractiveness, and tried to make sense of it.

For the purposes of the study, we selected 60 of the most recognizable game characters (you can see the list here). Next, we surveyed a hundred video game enthusiasts and asked to rate the characters’ attractiveness. Our goal was to find answers to the following questions:

This part of the report summarizes players’ declarations about the perceived attractiveness of heroes and heroines in video games. The second part will compare these declarations against respondents’ psychophysiological responses while watching video game trailers.

The tradition of telling stories centered on heroic characters is as old as the ability to create narratives. Anthropologists have identified this as a natural cultural phenomenon that bonded ancient communities. Today’s psychologists provide ample evidence that heroes are the building blocks of imagination and mental health in people.

Heros is a Greek word for “protector”; The ancient Greeks saw heroes as demigods of superhuman strength and beauty. The traditional hero is a morally flawless character who sacrifices himself (or herself) for others. Given the definition, characters such as John Marston from Red Dead Redemption, Garrett from Thief or Harley Quinn from Batman could not be considered heroic. On the other hand, characters closer to the traditional definition of heroism would include: Faith (Mirror’s Edge), Nariko (Heavenly Sword), Geralt of Rivia or Joel Montage (The Last of Us). Interestingly, modern psychologists are divided on the subject – no clear definition of heroism has been developed so far.

“(…) in psychological research people have not always considered flawless morality or the seemingly obvious sacrifice for others as the universal traits of heroes.”

Meanwhile, “ordinary people” seem to know different. American children see heroes as: active, beautiful, volatile, brave, confident, strong and… well dressed and rich. Older people are more likely to define heroes as an embodiment of the ideal I, i.e. the best possible image of oneself. Currently every hero can be an impressive and admirable character, regardless of their morality.

The pop culture hero is simply a character you would like to identify with – someone endowed with the desired qualities and achievements. From this perspective, a hero can be almost any game protagonist, and the only criterion here are the individual preferences of the player. We apply similar criteria to favorite movie heroes, celebrities, athletes and social leaders – why should it be any different in games?

Bottom line: according to today’s academic knowledge, there is no required set of features that would make a hero or a heroine. The characters closest to the ideal, archetypal image include The Witcher’s Geralt of Rivia, Maximus Decimus Meridus from the movie Gladiator and Marvel’s Captain America. But nothing can stop Hitman’s Agent 47, Tomb Raider’s Lara Croft or God of War’s Kratos from joining the club.

The standards of heroes’ and heroines’ attractiveness

There are two well-known universal features of attractive characters known to psychology: competence and warmth. This, however, is hardly sufficient.  Traits like strength, intelligence and talent (i.e. competence) help a lot, but it doesn’t mean that every modern hero must be helpful, trustworthy and kind (warmth).

In computer games, we deal mainly with the so-called martial heroes, i.e. a type of specialized heroes: trained in physical fight against evil to protect a community or the whole world. Such heroes should, above all, be brave, physically strong, resilient and belligerent. Of course, it’s best if they are also honest. These qualities are desired in both sexes.

Real heroes must also look good – psychological studies leave no doubt about that. Heroes must be “bigger” and “richer” than ordinary people. They do not necessarily have to be taller (it’s good if they are), or wealthier than others. However, they should make such an impression through their “heroic” status, such as rich clothing or armor. In contact with the hero, an ordinary person feels (readily) overwhelmed by his “superiority”.

What does “good looking” really mean?

To our knowledge, no psychological research on the attractiveness of the appearance of heroes and heroines has been carried out (or made public). Even more so, no such research has been conducted in the context of video game heroes. Therefore, we will rely on the theory of primitive human instincts, i.e. models of male and female attractiveness known from evolutionary psychology. If heroes should look good, what do attractive men and attractive women look like, according to psychologists? We’ve checked what famous researchers of human attractiveness have to say about it.

According to evolutionists, an attractive woman:

According to evolutionists, an attractive man:

Survival of the prettiest?

According to a research by Nancy Etcoff, beauty is a universal part of human experience and provokes pleasure and rivets attention. According to Etcoff, human sensitivity to beauty is innate; passed down from generation to generation in the process of natural selection. What’s more, beauty is considered a status indicator, and – as already mentioned – heroes should demonstrate high status. Ugliness, for centuries, was considered a sign of evil, madness or danger, i.e. the antithesis of heroism.

At Try Evidence, for the purposes of the study, we assumed that if people are so sensitive to beauty, then the more attractive the features of a computer game hero or heroine, the higher these characters should be rated.

The attractiveness of game characters according to players

We rated sixty characters from popular video games. Among them were protagonists as diverse as Geralt of Rivia, Marshall Law, Nathan Drake or Ezio Auditore, as well as women representing different types of beauty and attitude – e.g. Ada Wong, Samus Aran, Keira Metz and Lara Croft.

In the first stage of the research, we showed pictures of various characters to over a hundred people aged 18-56 and asked them to assess their overall attractiveness. Next, ten selected people assessed the attractiveness of potentially “perfect” heroes in much more detail. Finally, we invited thirty more people to our lab to evaluate the attractiveness of various heroes and heroines “in action” (in gameplay or trailer) and recorded their psychophysiological responses to the most attractive and unattractive characters. 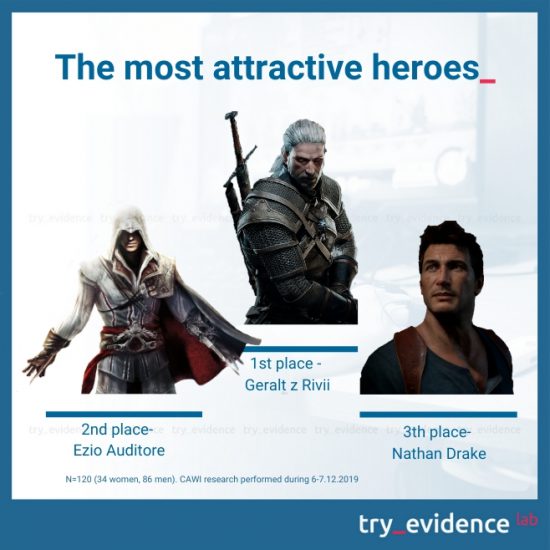 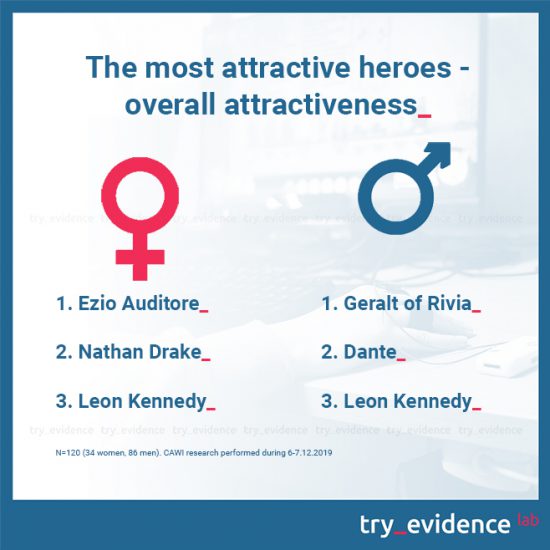 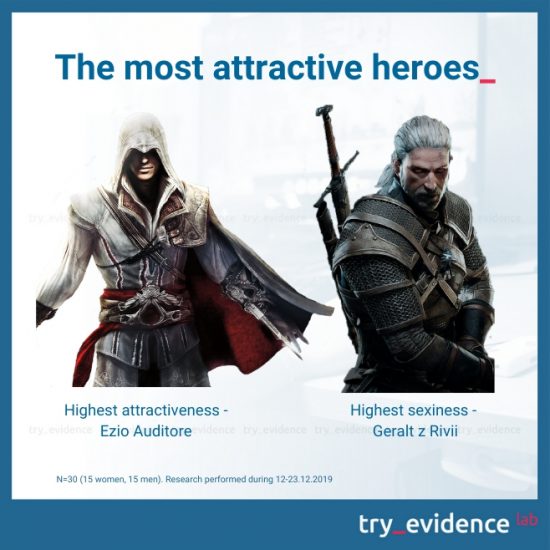 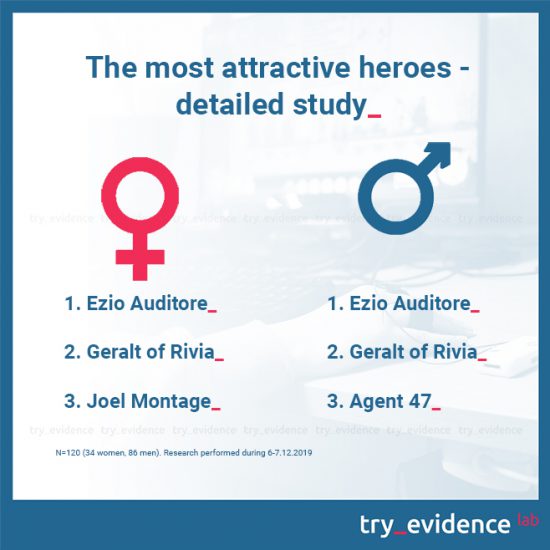 In the overall attractiveness study, the characters who ranked the lowest were: 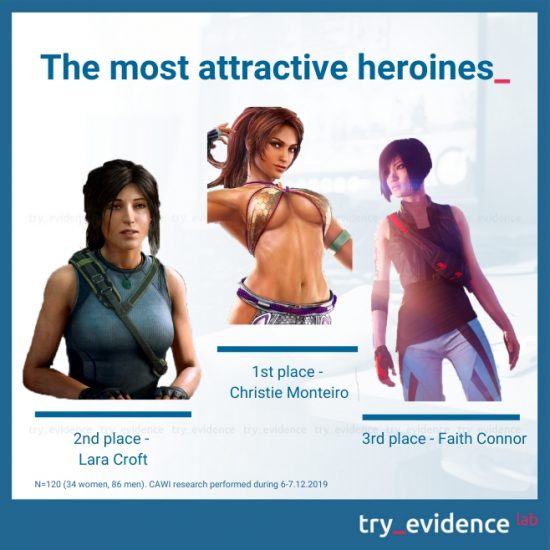 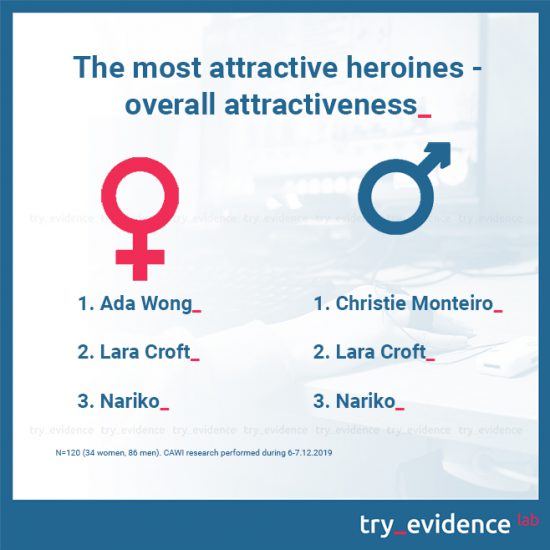 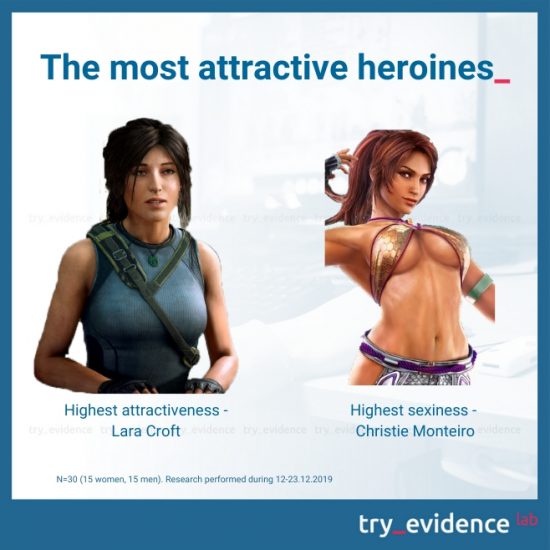 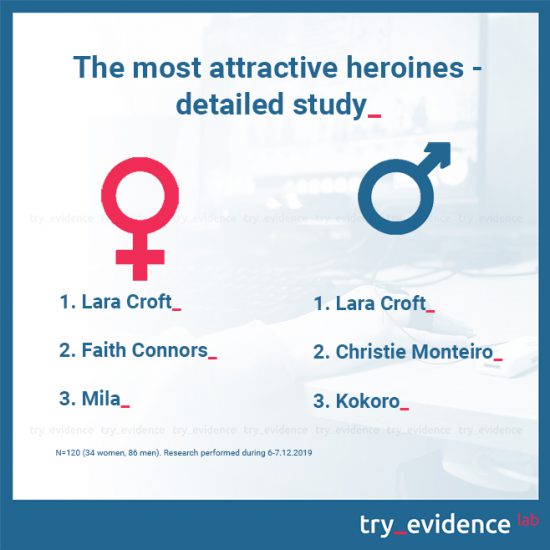 Does an attractive hero make you play more?

The results of our study are not conclusive. In the case of four female characters (Christie, Lara Croft, Juri and Kokoro) we noticed a significant correlation between their perceived attractiveness and the willingness of players to engage in gameplay. The more attractive the protagonist seemed to the surveyed players, the higher their declared willingness to play the game.

Interestingly, Christie was rated as less attractive by people who had played Tekken before, a game where she was one of the heroines. Her beauty was more appreciated by players who have never played the game. The results for Kokoro are different despite her also being a fighting game heroine. People who would have liked to play Dead or Alive rated Kokoro as attractive. At the same time, overall, Kokoro was the least preferred character of all the characters in our set.

Geralt of Rivia turned out to be the most preferred hero, although this was not reflected in the assessment of his attractiveness. In Geralt’s case, we observed the smallest discrepancy between the respondents’ opinions – most of them declared their willingness to play The Witcher.

Geralt’s situation looked interesting in comparison with the results for Lara Croft. She placed second in the category of most preferred characters. This time, however, there was a strong relationship with the assessment of her personal attractiveness. It is worth noting that definitely not everyone would have liked to play this character. In her case, the subjects’ preferences are most varied of all the evaluated heroes and heroines.

It seems that the knowledge of the character’s playing mechanics and its competences in the context of the game is one of the important factors in assessing the character’s attractiveness. Prior contact with the game has an impact on how players perceive the heroes and, as you probably have guessed, the impact is not always positive. 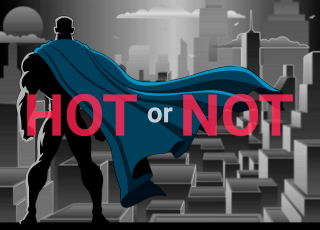 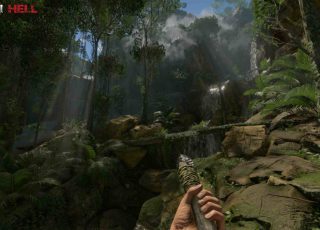