The judgment day has come, bringing us the battle between the Knight’s Order and Pictish warriors of Hellblade; juxtaposing high fantasy with Norse mythology and Celtic culture, and confronting Action RPG and Action-adventure. Which of the two highly anticipated system sellers of the upcoming generation of consoles (PS5 and Xbox Series X) would win the crowd? We were very curious at Try Evidence.

To figure it out, we set up the research and took a closer look at the trailers for Godfall: Reveal Trailer PS5 and Senua’s Saga: Hellblade II, trying to determine which one of them is:

We also used eye tracking to gain insights about:

Godfall transpired to be generally far less arousing than Hellblade. The story of Knight’s Order averaged 3.3 physiological peaks per minute (ppm) – females 3.4 and males 3.2, compared to Senua’s 3.9 ppm – 4.2 for females, 3.6 for males. We found it hardly surprising. Hellblade may be more emotionally arousing for females than males due to the fact that its main character is a female and the whole drama centers around her.

There was only one scene in the trailer that was equally arousing for both genders – the beginning. As many as 19 of 31 respondents experienced GSR arousal peaks in the first seconds of the trailer. Another cluster of peaks was observed at the end of the trailer, when the logo appeared on the screen. 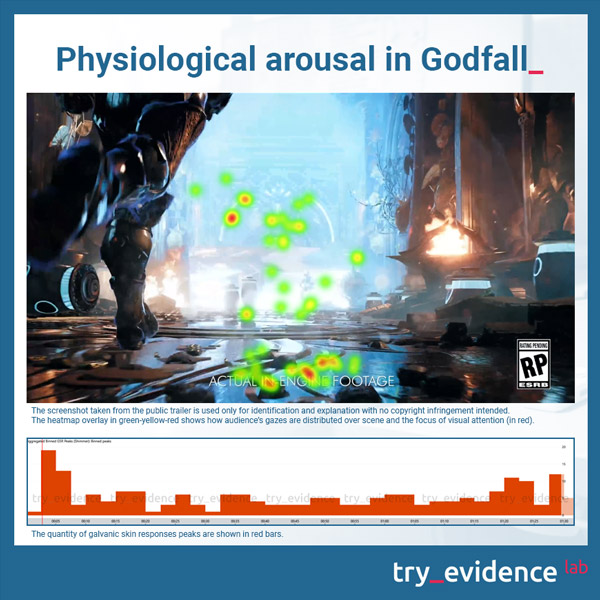 Most of respondents, especially females, demonstrated decreasing electrodermal activity (see below), which suggested they were less and less aroused by the trailer. 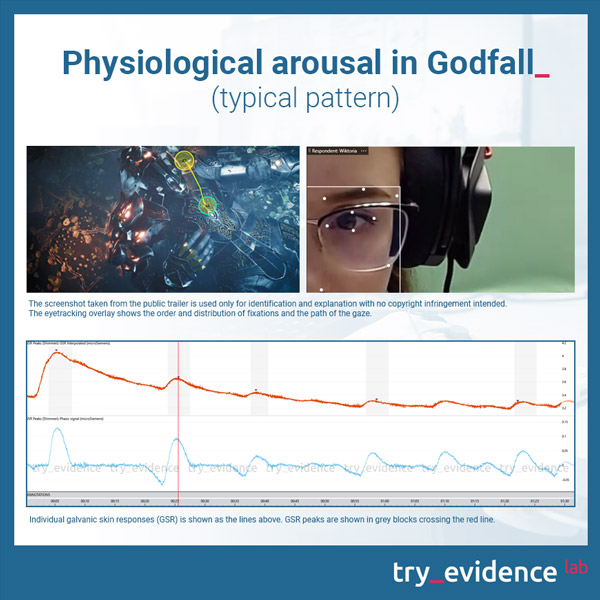 Females were found to be generally more aroused than males, which may indicate they are the appropriate target group, either for the game itself or for this particular trailer. But what could this mean for the publisher of this game? For example, that showing this trailer more to females than males might result in better engagement of the audience for less money. It’s much like buying more physiological reactions at the same budget.

Apart from the differences in general arousal, there were also two particular scenes that were perceived and evaluated differently by men and women. Let’s review them quickly. 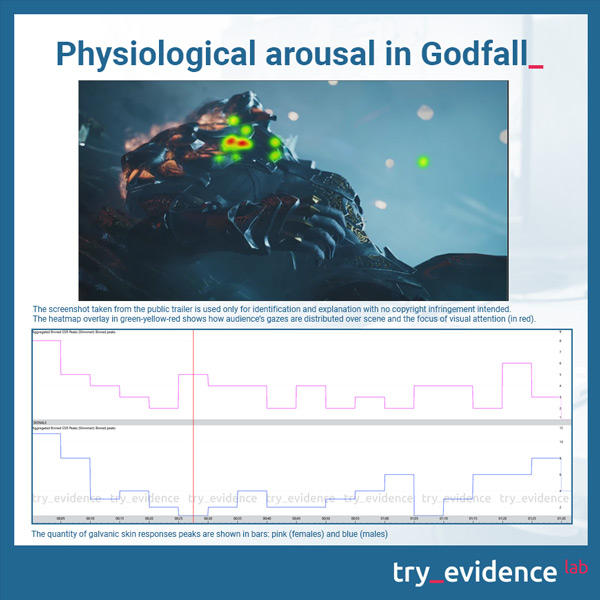 First, females reacted physiologically to the scene where one of the heroes fell to the ground and seemed barely alive. For males, on the other hand, this scene seemed unimportant (at least with regard to the physiological arousal level).

Another one was when lava formed the Godfall logo – again, females were aroused, while males were not. 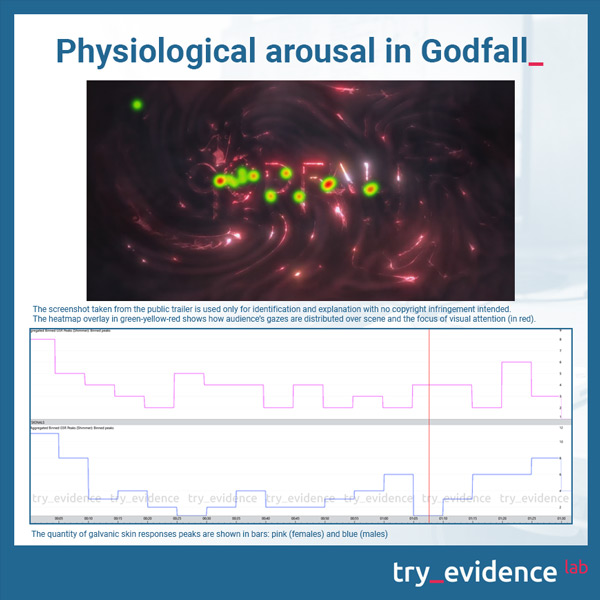 Apparently, such scenes are clearly not arousing for males. Then what is? 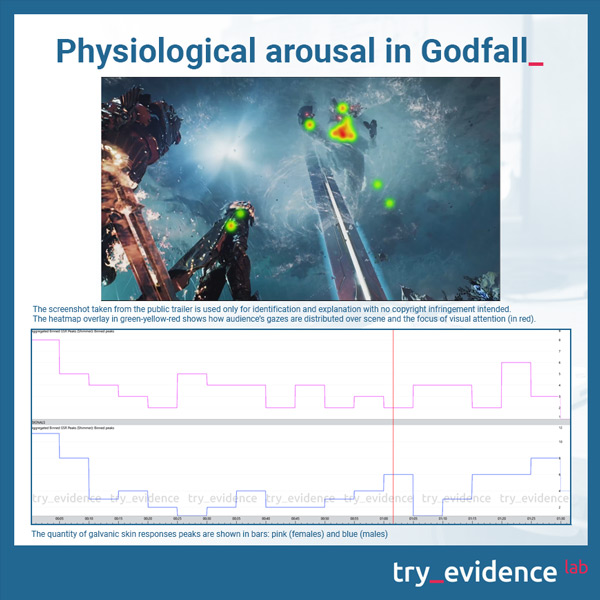 The dragon above a gigantic sword-like structure was visually noticeable for both women and men, but it caused arousal in men more than women. That’s a significant difference. Interestingly, however, none of the men expressed any feelings when watching this scene, while some women did.

The beginning and the ending of the trailer, where Sony’s claim and logo appear, showed further differences between the surveyed. Far more males than females were aroused by Playstation branding. Women peaked raher when exposed to the Godfall brand. 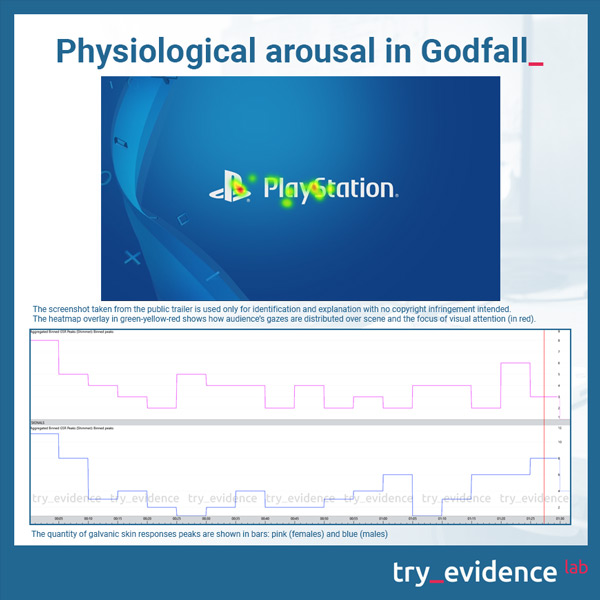 Senua’s story was arousing in a completely different way than Godfall’s. The peak of the peaks was located in the middle part of the trailer. Then, as the audience became acquainted with dark rituals led by people hidden behind strange dark masks, the tension seemed to wear off… 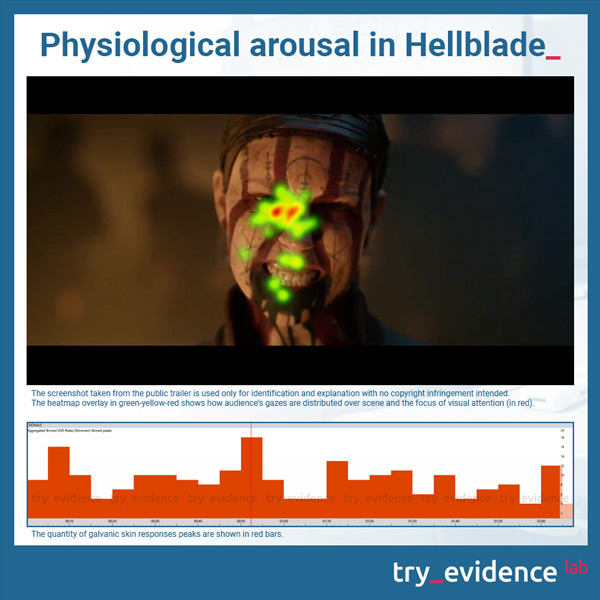 …until the scene with warriors approaching the mysterious monster.

The observed arousal pattern was definitely more “rollercoaster-like” than in Godfall. Below is the typical one, peaking around Senua’s animalistic scream of fury. This scene triggered dilated pupils and other signs of psychophysiological arousal. 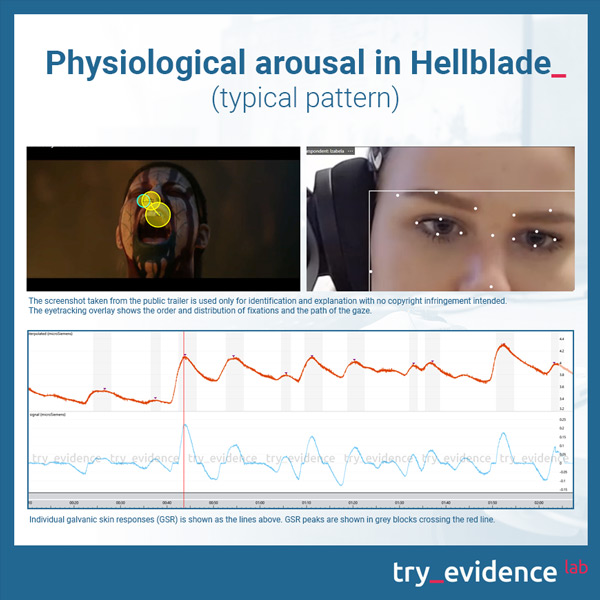 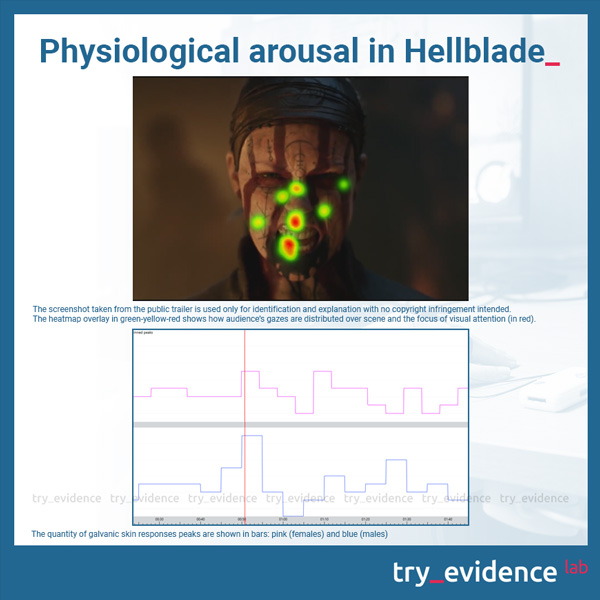 We observed relatively few facial emotional expressions in both trailers. However, interesting patterns emerged similar to the physiological arousal.

Women were more expressive than men, whis is a usual observation. The screenshots below show how dramatically the genders differ in their emotional expressions and – as far as we know from GSR – emotional arousal. 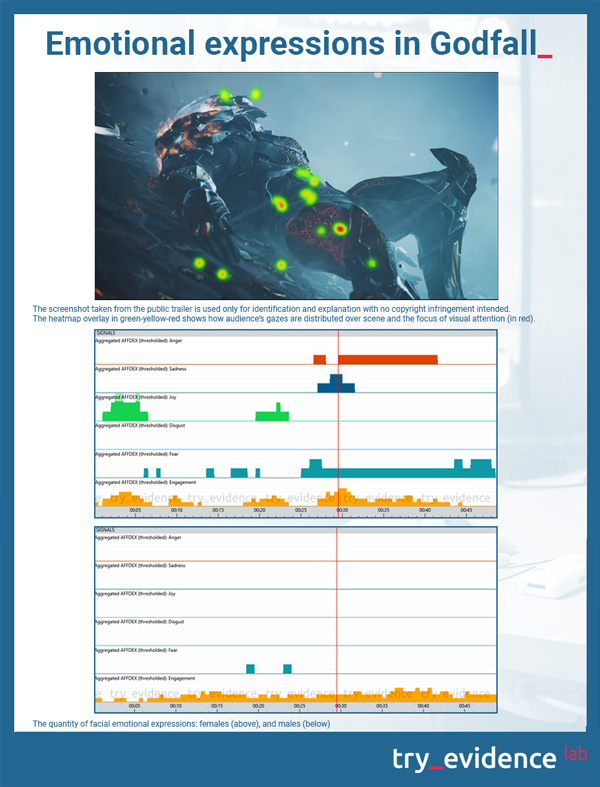 Females were sad, angry and fearful seeing a hero fall (you may also see the peak in ‘engagement’ which is a general measure of overall expressiveness). Males, on the other hand, didn’t care.

There we saw the difference between men’s and women’s emotional expressions. Men were more likely to be aroused by the trailer, but did not show the emotions on their faces. Women, on the other hand, showed a broad scope of emotions – joy, fear, sadness and anger. A bit surprisingly, one of the most joyful moments for a woman was when the game logo appeared.

Where did they look?

It’s a well known fact that recognizing faces is a critical aspect of social perception. This is why any human audience will almost always look for faces in the environment and, in milliseconds, try to fix s the gaze on a face. People search for faces even if there are thousands of potentially attractive distractions around. Look at the screens below to see what people actually pay attention to. The lighter parts of pictures are the “windows” where the audience looks most frequently and focused for the longest time. 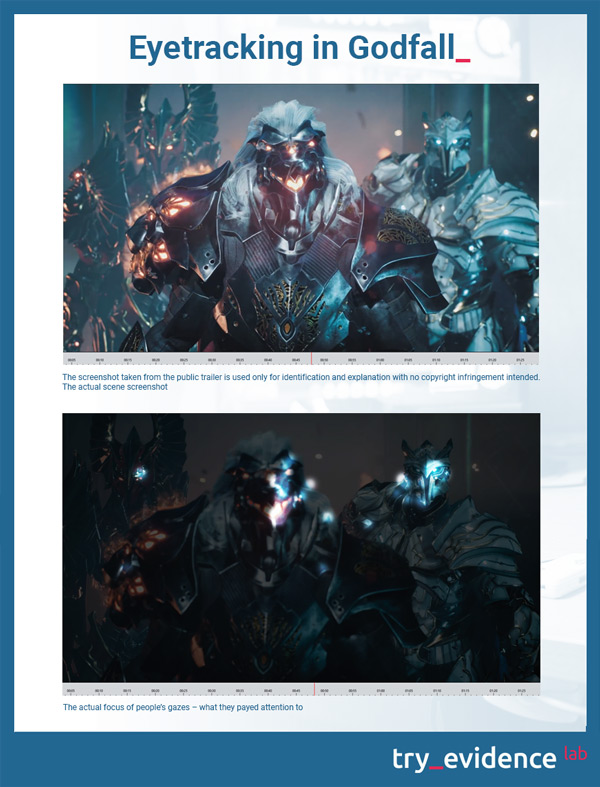 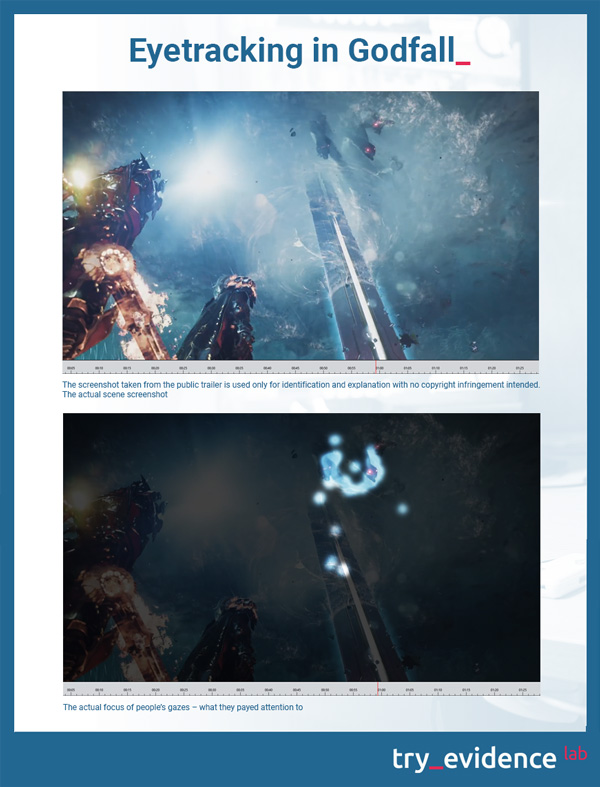 The one above is particularly interesting because there are so many stimuli around, even the armor “burning” in red dots, which are the types of stimuli that heavily draw attention. But not this time. As Daniel C. Krawczyk wrote in “Reasoning: The Neuroscience of How We Think” – “We use information transmitted from the face when we reason about other people and try to understand what’s on their minds”. That sounds critical, right? This is what we saw in our eye-tracking study. People always try to find faces in any set of cues reminiscent of faces (like in the dragon’s heads above). 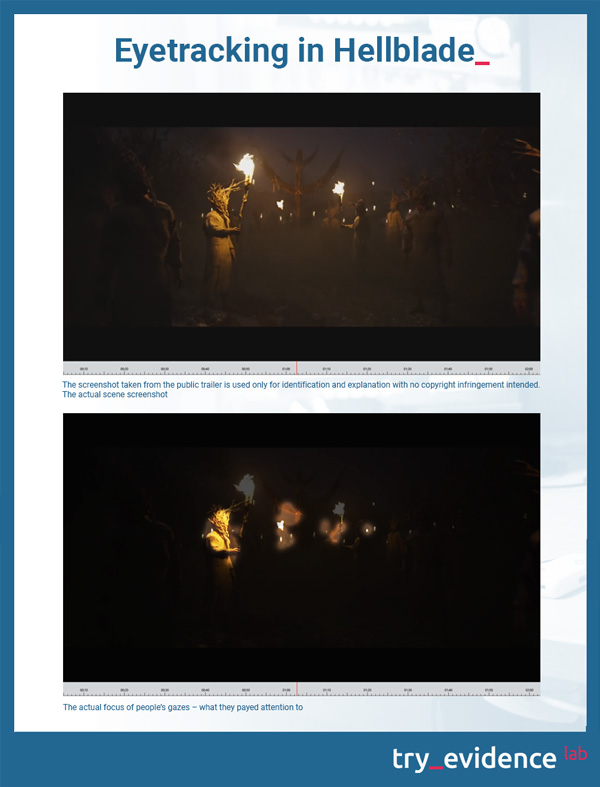 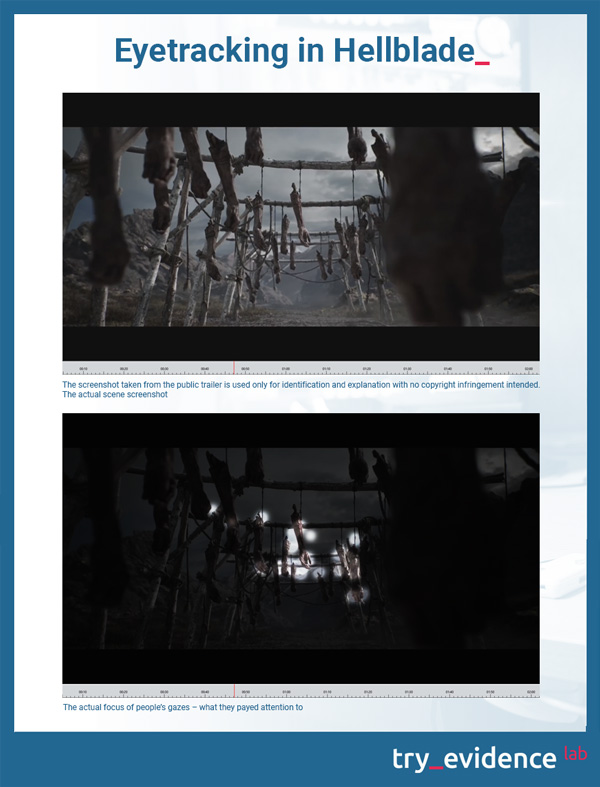 If not faces, then what? The answer seems disarmingly simple: the center of the screen. This is where people looked and focused on most of the time.

Each of trailers was assessed by each of participants on three scales ranged from 1 to 5:

We have combined those scores to form the index of attractiveness. Hellblade has clearly won this competition. 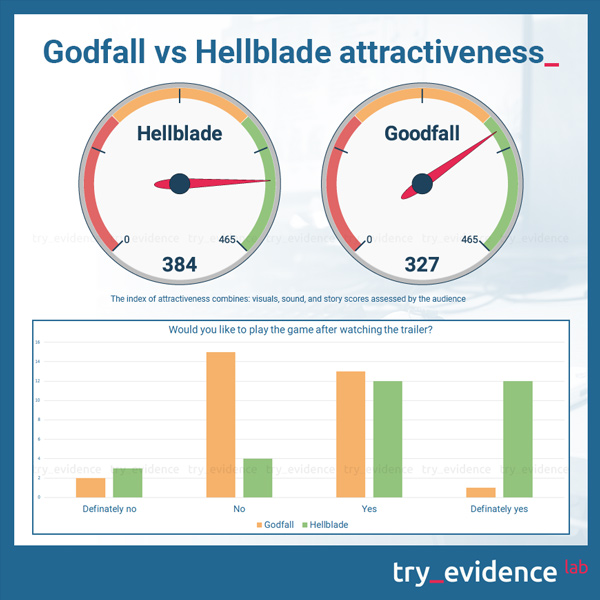 How unique is Hellblade?

Participants in the survey said that the trailer for Hellblade had an unforgettable atmosphere due to its visuals and sound, although they did not always understand the story. One of the women said that the trailer was scary, unsettling, crossing borders and evoking anxiety, and that she would play the game. The darkness, occult motifs, tension (well accentuated by the music) – all of these were especially attractive to the audience. There was also an usual point of narratives about Hellblade: it seems truly unique.

How unique is Godfall?

Godfall seemed forgettable. The trailer’s most remembered feature was the magnificent armors. The representative opinion of the trailer was “nice but nothing special”. The storyline was not appealing to the audience, sometimes perceived as childish. We heard declarations of boredom, even though the trailer was a short one.

It seems that Ninja Theory, the developers of Hellblade, have good reasons to be proud. Their trailer is not only more physiologically arousing and emotionally significant, but also more memorable and attractive in every way. The narratives about it were relatively rich and meaningful. The trailer convinced some of our participants to buy the game, at least declaratively.

Godfall was ok, but our respondents apparently didn’t care about it so much, both in an unconscious and conscious way. It was just another game trailer among hundreds. If anything, it worked well for Sony. The Playstation logo and branding in the trailer elicited arousal, especially in young men. We assume that it was related to the positive emotional states associated with the brand – our other research indicates that Playstation has a positive brand image.

The limitation of our research is only that the audience (N=30) was homogenic. We studied young, well educated, university students, who were not necessarily the core target for either Hellblade or, even less so, Godfall.

Hellblade is a brand of © 2020 Microsoft. All rights reserved. 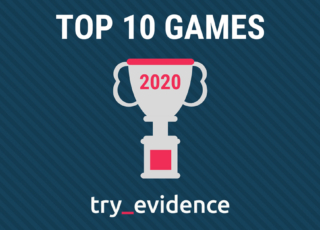